Articles and information on firefighters committing crimes, demonstrating that not all firefighters deserve to have a position of authority and public trust.

The El Segundo police and fire unions have retired fire department employees extolling their perfection to defend huge pay raises. They’re overpriced, and usually do a good job, but not always. Here are some examples.

One police officer took an unauthorized and unreported hour break reading a newspaper in a patrol car at the beach during patrol duty. Another left a patrol car unattended with the engine running and windows down, in front of City Hall on Holly Ave., across from Stuft Pizza where kids hang out. That attractive nuisance could have cost lives and millions of tax dollars had a kid taken it for a joyride and crashed.

Firefighter Michael Archambault was arrested, convicted, and sentenced for shoplifting five products totaling $354.95 from Costco. He was allowed to retire early with a $110,251/ year pension.

An El Segundo resident, a firefighter for another agency, suffered permanent disability because, he said, the paramedics claimed he was okay and refused to transport him to the hospital while he was having a stroke, allowing them to get back to the fire station to watch a big sports game on TV.

Here is proof and background information for the statements and examples in this letter.

This information was updated on April 21, 2015 to add the annual CalPERS pension income for retired El Segundo Fire Battalion Chief David K. Sharp for 2014 – a whopping $177,841.56 – not even counting benefits!

This information was also was updated to add the annual CalPERS pension income for retired El Segundo Fire Engineer (and firefighter union member) Michael J. Archambault for 2014 – a huge $111,937.56 – not even counting benefits!

David K. Sharp submitted an “op-ed” column which which was published on page 3 of the June 11, 2015 edition of the El Segundo Herald. It was basically an advertisement defending the excessive and unsustainable salaries and pensions of the El Segundo Firefighters’ Association (union) and their managers. He is a retired El Segundo firefighter who was a fire union member for most of his career, until he achieved his final rank of Fire Battalion Chief. He retired in 2007, and received $171,335.76 in 2012 and $174,770.76 in 2013 from his taxpayer-funded CalPERS pension after working for only 31.76 years.

Here is proof for David K. Sharp’s California Public Employee Retirement System (CalPERS) pension. It is provided by the TransparentCalifornia.com website. They obtained it from Public Records Act requests made to CalPERS.

Here is my summary and formatting of Sharp’s CalPERS pension information in the TransparentCalifornia.com database (I added his last position):

Note that public employee retirees in CalPERS get automatic pension Cost Of Living Adjustment (COLA) raises each year. Also, CalPERS pensions are a defined benefit pension plan and not a defined contribution plan like a 401(k), so CalPERS payments are guaranteed by the taxpayers regardless of investment portfolio performance and any risky investment portfolio mismanagement.

Rosemarie Radomsky, who submitted the “Who You Gonna Call?” letter to the editor of the El Segundo Herald, published on page 3 of the August 20, 2015 edition, is a retired City of El Segundo employee who worked as an administrative analyst in the fire department, according to a former El Segundo fire department employee. She is listed in the CalPERS pension database at TransparentCalifornia.com as a retired City of El Segundo employee with 10.85 years of service with the city. She retired in 2001.

For many months now, the other side has had no substantive arguments, so all they can do is throw hate speech and deceptive pseudo-quotations at me.

If having highly paid workers with tons of benefits were the key to honesty and good performance, then the term “featherbedding” would never have been invented to describe union overreach that included incompetent, lazy, disloyal, dangerous employees who are getting overpaid to do practically no work.

Neil Snow is the epitome of naivete that unions love in their members.

He knows nothing about the payoff and kickbacks (called contributions) made by unions to the politicians who gave them these ridiculous contracts.

Union integrity? Unions can and do recruit aliens, both legal and illegal, as members? S.E.I.U. ring any bells?

So much for the English-speaking Americans workers the unions claim to protect.

The billions of taxpayer dollars to “save” GM? Stockholder shares became worthless, yet 40 percent went to protect the union pensions.

In his letter to the editor in last week’s paper, he “parrots” from union manuals every propaganda terminology and definition. He writes, “‘scabs’ . . . is an euphemism for someone who cannot get a job on their own merit.”

He writes, “Employees who would accept lower wages, no bargaining rights and no job security do an inferior job. Lateness, no show, stealing.”

“Now just imagine those types of employees who would agree to those terms. And now imagine they are firefighters and police,” writes Snow.

Tell that to the non-union waitress at the Kettle restaurant in Manhattan Beach, or the non-union Federal Express Drivers, secretaries, auto mechanics, every person in the U.S. military, the 80 percent (280 million) of Americans in this country who are non-union. Sainthood of unions? … Continue reading →

My June 23 letter was not intended to imply guilt by association for all firefighters because one was arrested for shoplifting. That case exemplifies how the politically active government employee unions have fostered an insatiable appetite for and sense of entitlement to other people’s hard-earned money. … Continue reading → 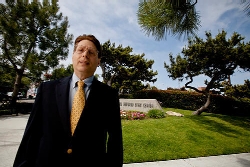