Make the Public Safety Project your Election Information Headquarters for the city of El Segundo, California.

Scroll down for Election Information, and further down for Candidate and Ballot Measure Information.

The next election in El Segundo is the Tuesday, April 10, 2012 El Segundo General Municipal Election.

The deadline to register to vote for this election is March 26, 2012 before 6 PM in the City Clerk’s Office.

The deadline to request a non-emergency Vote-By-Mail Ballot for this election is April 3, 2012.

However, questions regarding your polling location may also be answered by the County Clerk’s office.

Click HERE for a an application for a VOTE-BY-MAIL ballot for the April 10, 2012 El Segundo General Municipal Election (PDF file). Be sure to observe all deadlines.

The Sample Ballot contains a precinct map and a list of polling places depending on the address at which you are registered to vote. Call if the City Clerk’s office if you have any questions about your polling place.

VOTE-BY-MAIL ballots must be received before the polls close on election day.

VOTE-BY-MAIL ballots may be delivered in person at the City Clerk’s office or at any polling place during normal office or poll hours.

If you cannot find your assigned polling place, or if you lost your absentee ballot, you may request a Provisional Ballot and vote that ballot at any El Segundo poll for this election listed on page 2 in your Sample Ballot, including City Hall. You cannot be denied a Provisional Ballot when you request one.

The City Clerk’s office is located in City Hall at 350 Main St., El Segundo, CA 90245.
It is located on the south-east corner at Holly Ave., across from Stuft Pizza.
Parking is generally available in front of City Hall on Holly Ave. or Main St.

The most important item on the ballot is Measure P, which will be devastating to the residents and businesses in El Segundo if it passes.

Three of the five City Council seats are up for election. Each seat has a four-year term. This election will determine a new majority on the City Council, for better or for worse.

The three best candidates for City Council are, in order:

These three candidates are independent of special interests, including the firefighter and police unions that are the primary cause of our city’s financial problems.

Mike Dugan is also a good and independent candidate, but only three seats are up for election, and a vote for Mike Dugan is a vote against the first three good candidates.

The remaining four candidates out of the eight total candidates all have serious problems and would be bad choices for our city’s future, as explained in detail on this web site.

The City Clerk seat is up for election for a four-year term. Three candidates are running for City Clerk.

The best candidate for City Clerk is:

The City Treasurer seat is up for election. Only one candidate filed nomination papers for City Treasurer. Therefore, that candidate will be the next City Treasurer even though his name will appear on the ballot. He only has to get one vote, and obviously, he has nobody else to vote for.

All sample ballots look the same for this election, other than the name, address, and poll location for the voter the sample ballot is addressed to.

Here is what your marked sample ballot should look like, and remember to turn over your actual ballot before voting “NO” on Measure P: 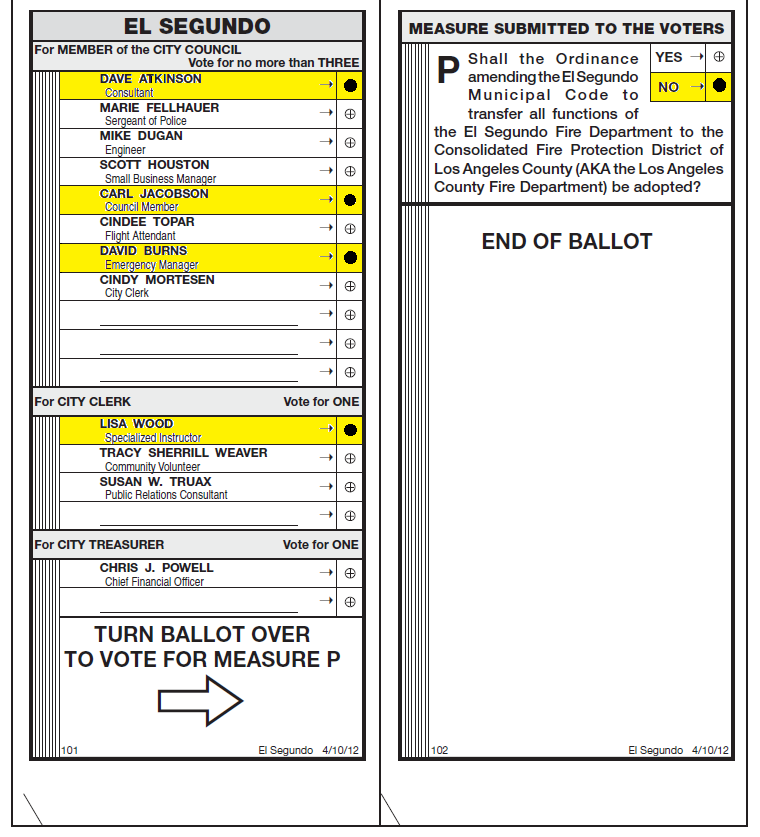 Note that Mike Dugan is also a good candidate, but he is ranked #4 and there are only three seats up for election.

Here is the City Council Candidate Ranking, from best to worst:

Here is the City Clerk Candidate Ranking, from best to worst:

You don’t have to vote for City Treasurer because there is only one choice.

Here is the City Treasurer Candidate Ranking, from best to worst (by default):

Campaign web sites and literature for the top-ranked candidates:

Click on the rectangle in the lower right corner for full-screen mode.
Press the Escape (“Esc”) key near the upper left corner of your keyboard
to return to small size viewing, especially if the video appears slow or
jerky.)

Click on the rectangle in the lower right corner for full-screen mode.
Press the Escape (“Esc”) key near the upper left corner of your keyboard
to return to small size viewing, especially if the video appears slow or
jerky.