The Police Officers’ and Firefighters’ Associations (unions) bankrolled the Measure B tax-hike campaign. FPPC campaign disclosure forms show the police and fire unions spent an overwhelming $39,247.50 in our city election ($19,033.50 police, and $20,214.00 fire) to influence voters on Measure B and the City Council race.

This is nearly four times the $10,000 they contributed to the “Yes on Measure A” campaign in 2014, for eleven tax hikes, on residents and businesses. The fire union probably spent more than $100,000 on their Measure P campaign in 2012, to outsource our local Fire Department to Los Angeles County for a reduced level of service, for their own financial benefit.

None of the firefighters and only about one-fourth of the police live in town. They campaign in our local elections to maximize their pay and pensions, and raise taxes and fees to pay for it, no matter how excessive and unsustainable.

The latest available El Segundo City Employee compensation data, for 2014, at TransparentCalifornia.com, shows the 58 sworn police employees had the following total annual pay and benefits statistics: Minimum=$139,028; Maximum=$358,536; Average=$228,240; and Median (half above and half below)=$214,867.

El Segundo Flyer #3 – Vote “NO” on Measure A, and Against BILL FISHER!

Three flyers containing verifiable factual information about Measure A were distributed to residents and small businesses on the weekend of April 5, 2014.

Below is the content of Flyer #3, with added photos, links, and information documenting the facts contained in the flyer.

Vote “NO” on Measure A, and

The “Yes on A” campaign has lost the debate. Their arguments have been refuted, and many have been shown to be outright deceptive and dishonest. So they switched to using the campaign slogan, Measure A is “supported by people you know and trust”. But if you really knew most of them, you probably would not trust them.

“Measure A – Supported by People You Know and Trust” slogan on a “Yes on Measure A” campaign mailer delivered on 3/29/2014.

Sandra Jacobs, one of two “Yes on A” campaign co-chairs, was one of a slate of three Fire and Police Union sponsored City Council candidates.

See the details on the below, including the $46,204 in campaign money.

Joe Harding, one of two “Yes on A” campaign co-chairs, was AGAINST the tax hikes when he was a Hacienda Hotel employee. NOW, this ex-employee is FOR the tax hikes that will be devastating to his former employer.

Harding spoke out strongly against smaller Utility Users Tax (UUT) and Hotel Transient Occupancy Tax (TOT) hikes at the 8/3/10 City Council meeting. Anyone can verify this by watching the City Council meeting video at PublicSafetyProject.org or ElSegundo.org. Here are his quotes from that meeting:

“Joe Harding, representing the Hacienda Hotel and also a resident of El Segundo.” “Most of you have seen first-hand what our industry has endured over the past 27 years.” “Our industry just can’t handle any increase.” “You must say ‘No’ to the hotel killer tax!” “A TOT and a UUT would hit us twice. That’d be like kicking us when we’re down, and then running us over for good measure.” “The City must make unpopular and difficult adjustments to their payroll and expenses.” “Leave the TOT where it is.”

Click HERE to see the video of Joe Harding making this speech at the 8/3/10 El Segundo City Council meeting, and to read a transcript of his speech.

Looking down the “Yes on A” campaign’s list of supporters (“People You Know and Trust”), we find:

(Click HERE for more details and documentation on these “People You Know and Trust”.)

Let’s go down the memory hole and recover Bill Fisher’s forgotten history. Fisher’s political career was launched by the Fire and Police Unions when they ran a three-candidate slate including Fisher and Sandra Jacobs (“Yes on A” campaign co-chair).

Fisher claims he knew nothing about the union support. However, Fire Union president Kevin Rehm’s cell phone number was on the campaign signs for each of the slate candidates as the contact number for campaign sign management. 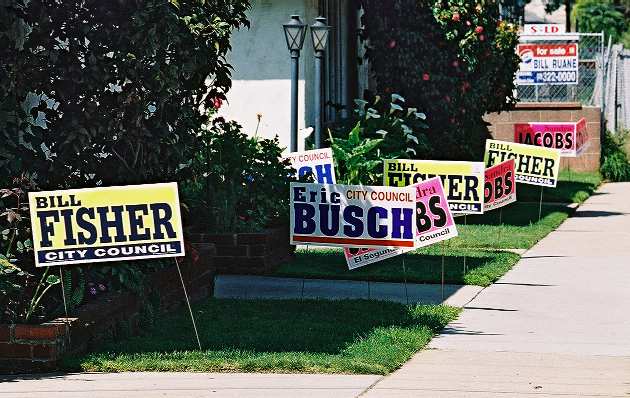 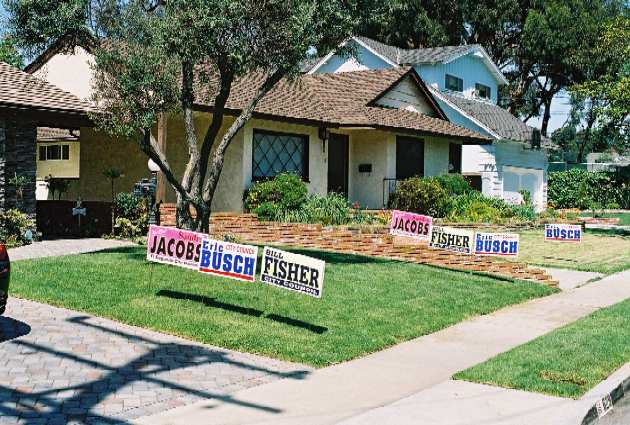 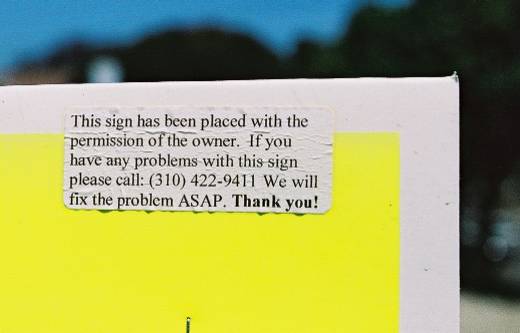 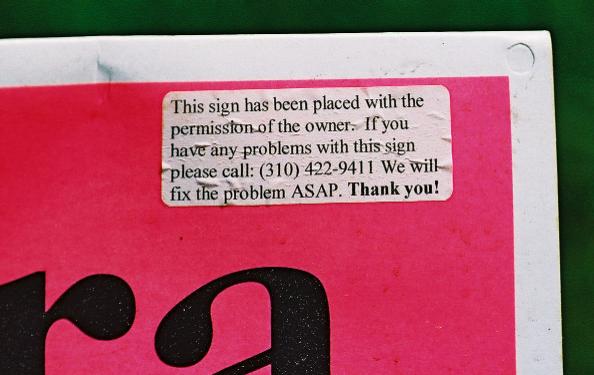 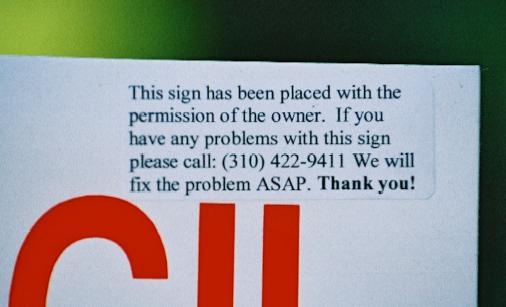 Click on each picture for a larger view (will open in a new browser window or tab). 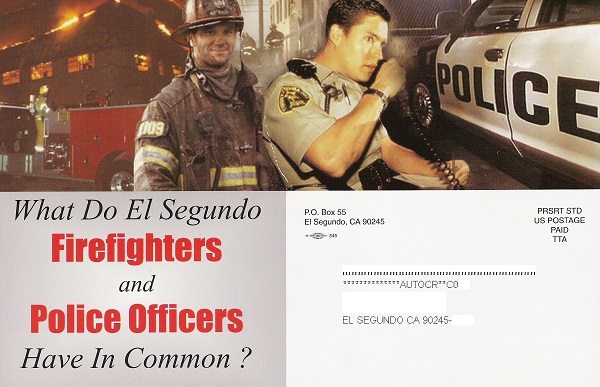 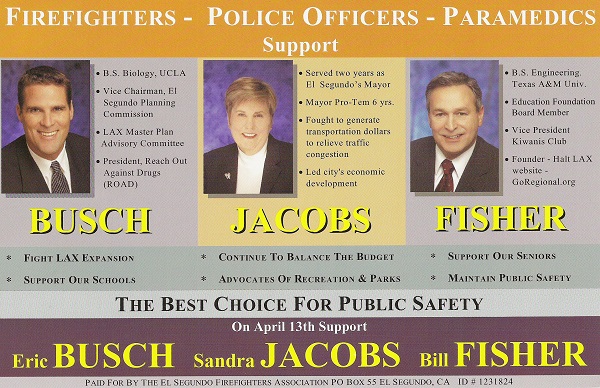 Rehm sent a deceitful campaign mailer on official Fire Union letterhead, threatening seniors with “the possibility of our paramedics not being available when you need them” if the three union-approved candidates were not elected!

Click on the letter below to see a larger image of it (will open in a new browser window or tab). 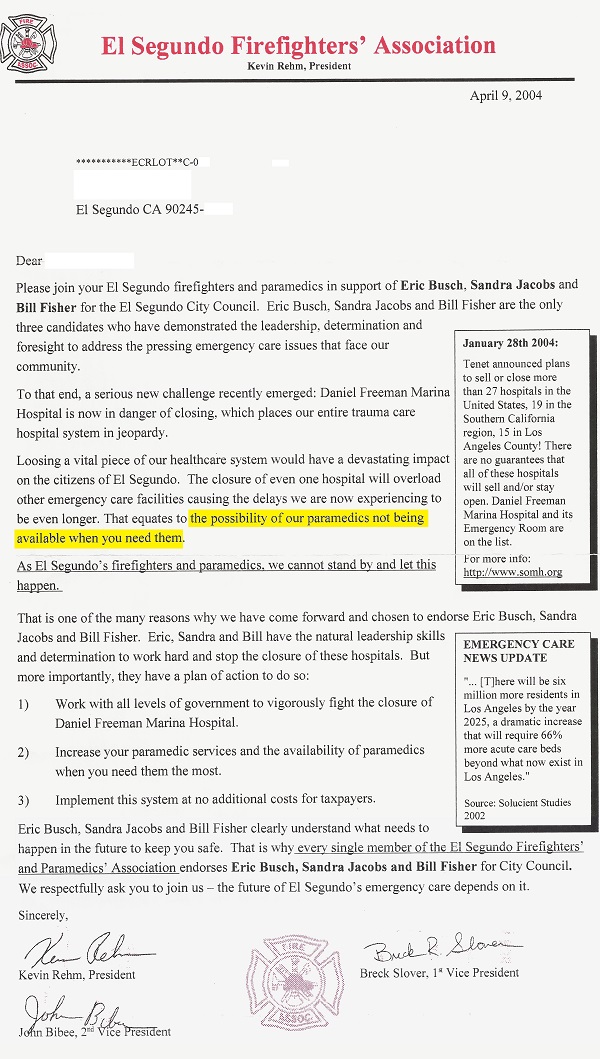 The mysterious “Committee To Continue The Progress Of El Segundo” spent $46,204 including union and out-of-town donations campaigning for the slate. Fisher narrowly lost that election, but was APPOINTED to the Council two years later. That election was CANCELLED due to lack of candidates. The unprecedented campaign spending intimidated potential challengers.

Fisher rewarded the unions well with 11.25% to 23% in pay raises during the Great Recession, including retroactive pay raises effective nine months before the date of approval, plus additional 5% annual “step-raises”, jacking up compensation and pensions. Fisher also supported single pay raises of 14.9% to 32.3% for the non-union managers (Deputy Fire Chief, Fire Battalion Chiefs, Police Chief, and the Fire Chief) to avoid “salary compaction”.

These pay raises included the following:

In addition to the above pay raises, the firefighter and police employees were (and still are) given 5% annual “step raises” in each of the first four or five years after the year they are promoted or assigned to a new position.

In addition to the above pay raises, the firefighter and police employees were (and still are) given periodic “longevity” raises every so many years.

Rehm’s pension pays him $172,516 per year. Measure A will only pay for more union rewards!

Fisher hoped to get appointed to City Council again without an election, but a third candidate emerged the last day of the filing period. Please Vote NO on Measure A and AGAINST Bill Fisher on April 8th. For voting information, see ElSegundo.org or contact the City Clerk.

This flyer is a response to late campaign mailers and late campaign contribution reports.
Check the PublicSafetyProject.org web site for documentation, proof, and responses to any last-minute hit pieces.
Authored by Michael D. Robbins. Not authorized or endorsed by any candidate or committee.
Paid for by Michael D. Robbins, P.O. Box 2193, El Segundo, CA 90245. 4/4/2014 Rev. 1