I would like to assure Marie Fellhauer’s campaign supporter, Jenica Brigham, that I do exist. I am not “the same person” as Mike Robbins as she claimed in her insulting 4/7/16 Herald letter. Brigham attacked me, Mike Robbins, and others with childish name-calling and other baseless personal attacks because we reminded voters of Fellhauer’s record on City Council. She used personal attacks because she could not disprove any of our facts about Fellhauer’s true record.

Brigham claimed the residents “think everything should be free.” In fact, we don’t want to be charged twice for the same things, such as $1,850+ fire department ambulance transport fees when taxes already pay for our fire department.

Another Fellhauer campaign supporter, Beth Schodorf, submitted a letter calling accurate descriptions of Fellhauer’s City Council record a “smear campaign”. Now who’s doing the smearing? Schodorf even defended Fellhauer by attacking Lou Kutil. That was a mistake. For many years Lou Kutil, an elderly resident himself, has volunteered his own time and money to drive elderly residents to their doctor appointments, wait for them, and drive them back home.

Incumbent City Council candidate Marie Fellhauer said she “is fighting to get our fair share of the county property tax levy.” That may sound nice as a campaign slogan, but it has little basis in reality.

Fellhauer and Dave Atkinson voted to charge El Segundo residents and non-residents fire department ambulance transport fees of $1,850 or more per transport. They had plenty of time to rescind the fees, but did not, even though residents spoke against them at City Council meetings. Is it realistic to believe they might rescind these fees after they are re-elected for another four years?

Is it realistic to believe Fellhauer would have rejected the police and fire union endorsements had they decided to endorse her? Her allies and supporters, former Mayors Eric Busch, Bill Fisher, and Sandra Jacobs, all received police and fire union endorsements and campaign expenditures. The firefighters even delivered and installed their campaign signs.

Fellhauer claims she’s making a sacrifice by declining City Council benefits. She said others should make the same sacrifice. However, she is not making any sacrifice because she gets generous benefits through her LAPD job. City Council pays only about $10,800 per year. Hopefully, the benefits help attract more competent and honest candidates.

The police officers’ “association” (union) sent out their annual union fundraiser mailer, exploiting murders of police officers elsewhere to solicit money from residents and businesses. Giving them money is absurd for many reasons. If you already gave them money, try to get it back.

First, the non-deductible contributions go to their union. The police and fire unions spent more than $10,000 in their labor contract campaign for 11 half-page newspaper ads, two city-wide mailers, and mobile billboards driven around town with falsehoods attacking our city council for doing their job to protect our city from bankruptcy.

Second, the police and fire unions contributed $10,000 to Measure A in 2014. Measure A was eleven tax hikes in one measure, on residents and businesses, to pay for big past and future police and fire compensation and pension increases.

Third, the unions don’t need our donations. Police and firefighters are paid far more than nearly all El Segundo residents. Their total compensation has been about $150,000 to $385,000 each per year, with three to six million dollar pensions, due to union campaigning to elect city councilmembers who give the biggest pay and pension increases – and raise our taxes and fees to pay for it.

And fourth, the union solicitation is corrupt. It uses realistic-looking fake ESPD police badges, and many residents believe they will get faster and better service or avoid a ticket if they pay off the union and put the union’s police badge decal on their window.

Feels Neither is Right

A “fee” over $1,800 to any El Segundo resident, for the transportation and mileage only, to the nearest emergency room, by city paid (taxpayers) paramedics in a city paid (taxpayers) vehicle. Why? the city wants to “recover” back some of the 14 million dollars it pays to the fire department for doing their job. Please note, at 3 a.m. paramedics would still be paid the same whether they responded to a 911 call or were left sleeping.

The 9/15/15 council agenda about the budget, on page C-2, states “collecting for fire inspection fees and for non-resident paramedic transportation”. So is the budget fee statement incorrect or the city wrongfully charging its citizens? Either way taxpayers already paying for their city paramedic service should not be charged an “additional fee” if they use that service. What would happen if the people of El Segundo hired someone to “recover” the money for the days, months and years for fire services that they didn’t call for?

Neither is right, yet the city is doing it. Again why? 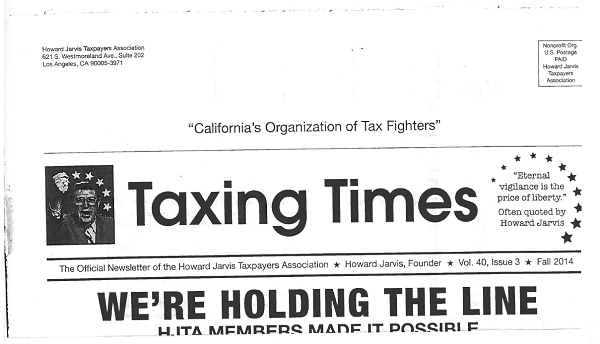 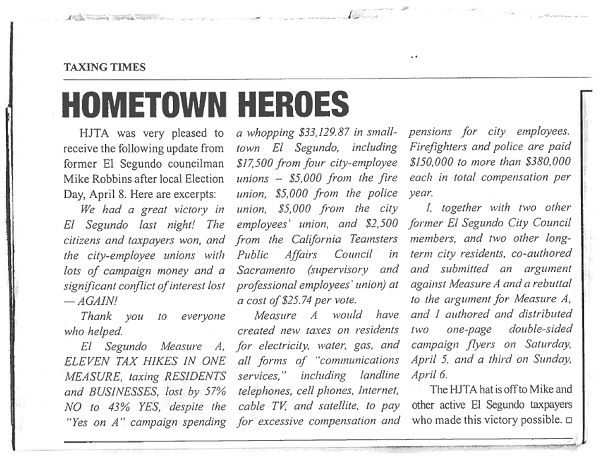 Thank you to the 57 percent of voters who voted No on Measure A and to those who voted for Suzanne Fuentes and Mike Dugan. That puts our city on a better footing for negotiating with the city unions and instituting necessary compensation and pension reforms to ensure the viability of El Segundo as a city.

There’s an inherent conflict of interest when government employee unions campaign for candidates and ballot measures that will increase their salaries and pensions – and raise our taxes to pay for it. We don’t want people who live outside our city running the city for their own economic benefit.

No on Measure A

Mayor Fisher claims the “business community” supports Measure A, and the City Council has no control over employee pension costs. Not true.

Most El Segundo businesses oppose Measure A. Ninety percent are not Chamber members, and the Chamber board did not allow its general membership to vote before supporting the tax hikes.

The council can save several million more yearly by eliminating automatic additional 5 percent annual “step” raises, and “special compensation” for things that are existing job requirements or unrelated to the job.

These savings must be negotiated with the city unions later this year, after the April election. The Measure A tax windfall will weaken the City Council’s bargaining position and preclude these savings.

See PublicSafetyProject.org for more information. Vote “no” on Measure A.

Not happy with Measure A

Mayor Fisher is threatening to contract out our fire services to county if we don’t approve his Measure A tax hikes. These are empty threats. There’s no advantage in outsourcing. It would reduce services – not save money. Ninety percent of voters rejected Measure P to outsource fire services. Clearly, we can do a referendum against an ordinance to outsource services.

Last year City Council raised Chevron’s taxes by more than $8.5 million on average per year for 15 years. And the council can save many millions of dollars per year by getting the employee compensation and pension cost increases under control.

All residents will pay much more of the $6.6 million annual Measure A taxes than the “Yes on A” campaign mailer claims. We will pay the new business taxes that are passed on to us as customers, in addition to the new taxes on our electricity, water, gas, landline and cellular telephone, cable TV, satellite and Internet bills.

The new taxes will go for huge past and future fire and police union pay raises and resulting pension cost increases, as in the past. That’s why the fire union donated $5,000 to the “Yes on A” campaign.