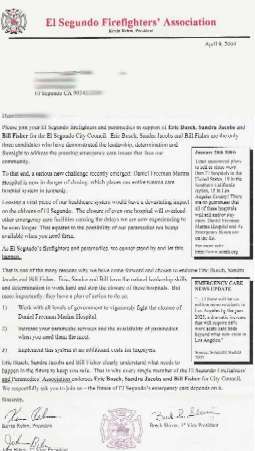 They sent a letter on Union letterhead dated 4/9/04, signed by all three fire Union bosses, to El Segundo seniors threatening that if they don’t vote for Eric Busch, Sandy Jacobs, and Bill Fisher for City Council, hospitals may be closed and there may not be emergency service in El Segundo when needed!

Click on the letter to the left to see a larger readable image of the complete letter (150 KB).

Click on the envelope below to see the text of the letter.

The Fire Union bosses who signed the letter are:

Click on the envelope below to see an analysis and the text of the Senior Scare Letter. Notice how the envelope also carries the fire Union logo.

A History of Police and Firefighter Union Corruption in El Segundo

“Campaigns used to cost less than $5,000 and a lot of shoe leather. We are at risk of having all future Mayors and Councilmembers selected before the election by Union bosses and outside special interests. We may lose our Democratic elections.”

Read all about it and see more pages, documents, and images posted throughout the week!