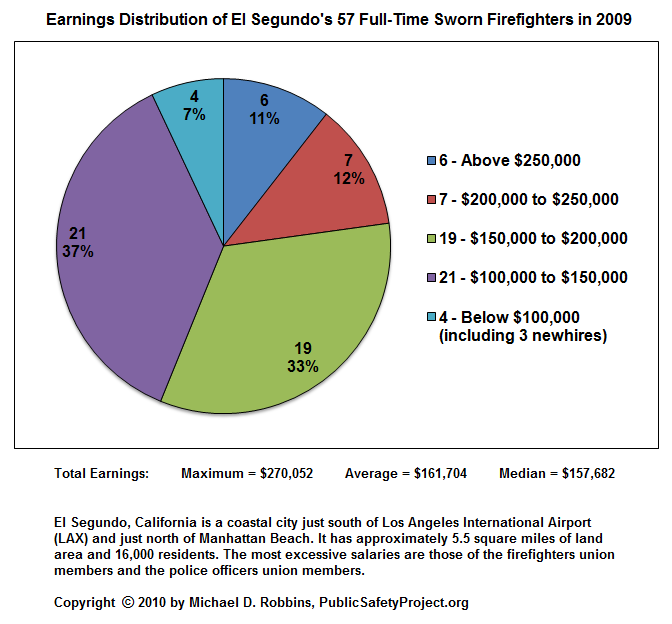 The sworn firefighter ranks, from lowest to highest, are: Firefighter, Fire Engineer, Fire Captain, Battalion Chief, Deputy Fire Chief (position eliminated in 2010 with the early retirement of Deputy Fire Chief Eric Moore), and Fire Chief. Firefighters with Paramedic training and certification get additional pay whether or not they are assigned to Paramedic duty. Fire Captain and below are members of the El Segundo Firefighters Association, which is just a fancy name for the firefighters union. Battalion Chief and above are management.

The sworn firefighters work on duty on a 48-hour shift, and then are off-duty for 96 hours, i.e., for four full days. As a result, commuting to and from work is not an issue, and only a few firefighters live in the city. They can live far away where land and homes are considerably less expensive than in the city. Also, they have plenty of time off from work to have a second job or run their own business. Alternatively, if their buddies call in sick or take vacation leave, they can be called in to work and get paid the overtime rate, which is one and a half times their already excessive regular pay rate.

Because firefighters have four days off at a time, i.e., a 6-day week including a 4-day weekend, they do not have to take much of their vacation or sick leave hours to have time off, and they are allowed to accrue, accumulate, and roll over from year to year huge numbers of leave hours that can be later cashed in after pay raises at a higher pay rate.